Vandal or Phantom - which of the two guns do your prefer and why?

Personally, I use the Phantom a lot more than the Vandal for the simple reason that the Vandal spray is so aggressive and difficult to control.

I use the vandal more, but like both equally, I’m not sure why I buy the vandal over phantom I guess I’ve just started to get used to it

I use the phantom more, I feel like the vandal for me has been very RNG, I have very good aim, but when I use the phantom its even better. The flicks are nice, less recoil, spray n pray, its the perfect gun.

It’s only similar that it has 1 shot kill, but the spread and fire rate is just soo bad

Aha, since this thread I’ve use phantom to see to difference, i can understand how longer fights it may help for spray control etc, but yeh I’m used to the 1 shot -> dead kinda rule haha

I just use both, and interchange, depends on what the day is almost, if you pull down too much, then vandal, but if you just cant control that day, then phantom whilst working on vandal sprays. 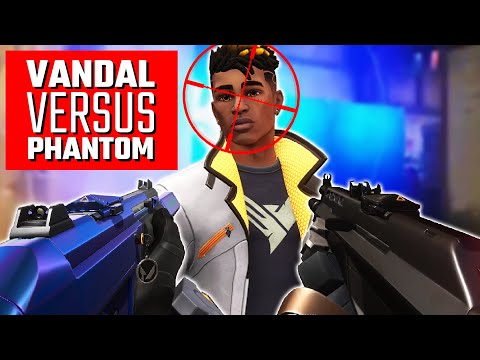 The Vandal seems a lot better after the latest patch. I started mainly using Vandal now, seems to be the best choice due to 1 shot headshot all the time and less recoil now

Yeah, I forgot to post something about that…
But for people who are still getting used to crosshair placement, I still really think that the Phantom may be their gateway into this style of gameplay (coming from apex, or overwatch) Due to the high fire-rate and now super low recoil, and then once they start clicking heads, the vandal would be so much easier for them

Personally I think both are lacking. Something was definitely changed regarding the recoil of both guns a couple weeks back because the spray pattern has felt so inconsistent, whereas before they were manageable. Although, between the two the Vandal is better if you have good aim and hit headshots, but the Phantom is a little better for spraying. The Vandal is just useless if you spray. I’ve been using the Ares a lot more due to the inconsistency with the Vandal/Phantom, and honestly since they buffed the Ares it’s probably the most accurate gun in the game at a range which is just mind blowing.

Personally I think both are lacking.

I would post links to screenshots and videos with actual tests I performed which clearly show that everything above is the case but I can’t post links on this forum(admins set is that way).

Something was definitely changed regarding the recoil of both guns a couple weeks back because the spray pattern has felt so inconsistent, whereas before they were manageable.

They did change rifles a couple weeks back but they raw buffed them by a lot:

So if it’s worse for you now, it’s only because you didn’t get used to it. They’re just much better rifles now than they were before.

Although, between the two the Vandal is better if you have good aim and hit headshots, but the Phantom is a little better for spraying.

Vandal is definitely better to hit headshots because it one-headshot kills people on any distance. But Phantom better for spraying is super debatable.

The Vandal is just useless if you spray.